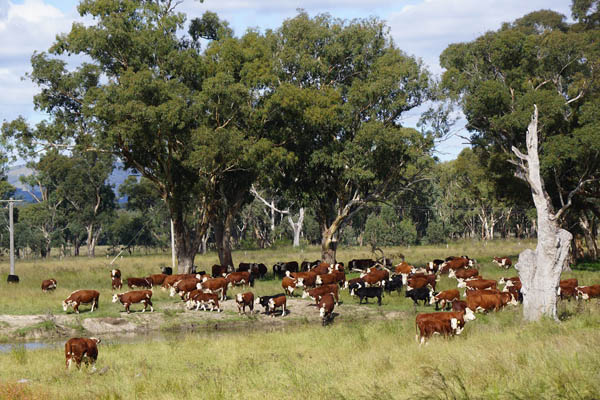 Glenwarrah Herefords was established in 1982 by Stephen Collins, after a very successful start in the Dairy industry. Steve developed his A.I.S. herd into one of the most productive herds in NSW.
Steve’s passion for the Hereford breed has only strengthen over the past 30 years, going from selling at Glen Innes Bulls sale, then joining Stannam Herefords at Tenterfield, to developing his own sale here at ‘Brooksby’ which is now in its 10th year.  He also runs a Hereford commercial herd which is mixed with the stud cows so the bulls we purchase for the stud must perform across all the cows to remain breeding for stud purposes.  Steve has always felt that you have to be aware of what the commercial breeder is after to understand what type of bulls you should be breeding in the industry.  He places a major importance on muscle, milk and structure in both herds.

They are open for Northern Beef Week with their bulls on display and also a cross section of the female herd both stud and commercial.

10TH ANNUAL GLENWARRAH ON PROPERTY SALE - WEDNESDAY 26TH JULY
This year’s sale we are offering a very good line up of Glenwarrah Hereford and Booksby Angus Bulls. Viewing from 9AM with the sale commencing at 11:30AM.
Contact Info
Location Map