Jindalee Herefords are in the fertile Kings Plains & Kingsland areas between Inverell and Glen Innes in Northern NSW.

Our stud was formed in 2001 after Eunice and Angus received a wedding present of 2 stud heifers from Bill, Irene & Dugald McIndoe (Smithston Herefords, Glen Innes). After this we purchased females at several stud dispersals and now we run approximately 100 registered females.

We sell our main draft of bulls at the annual Glen Innes Bull Sale which is held late in July each year, the remainder are sold privately.

We are regular participants at local shows and each year we like to exhibit our cattle at the Royal Queensland Show (EKKA) where we have achieved some success over the years. We have always been active in Hereford Youth activities and Will has twice been the recipient of the Will Tanner Trophy and Clubman of the Year for 2017 at the Northern Hereford Youth Show as well as being named one of the Australian Hereford Youth Ambassadors for 2017.

At Jindalee we like to produce soft easy doing cattle which perform well on grass. Currently we are running about 400 commercial cows with their offspring taken to feedlot weights.

Please feel free to give us a call and drop into visit at any time. 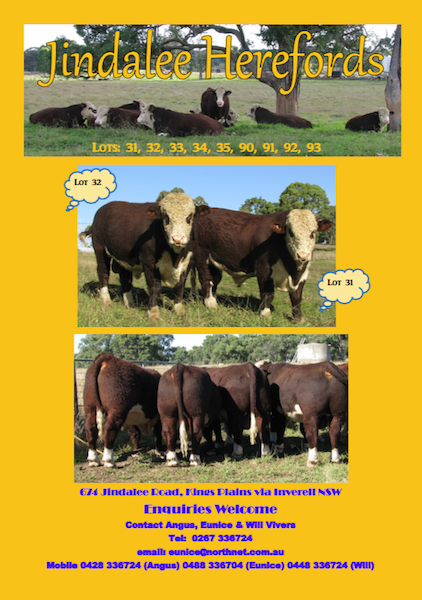 Directions: Jindalee Herefords are in the fertile Kings Plains & Kingsland areas between Inverell and Glen Innes in Northern NSW.